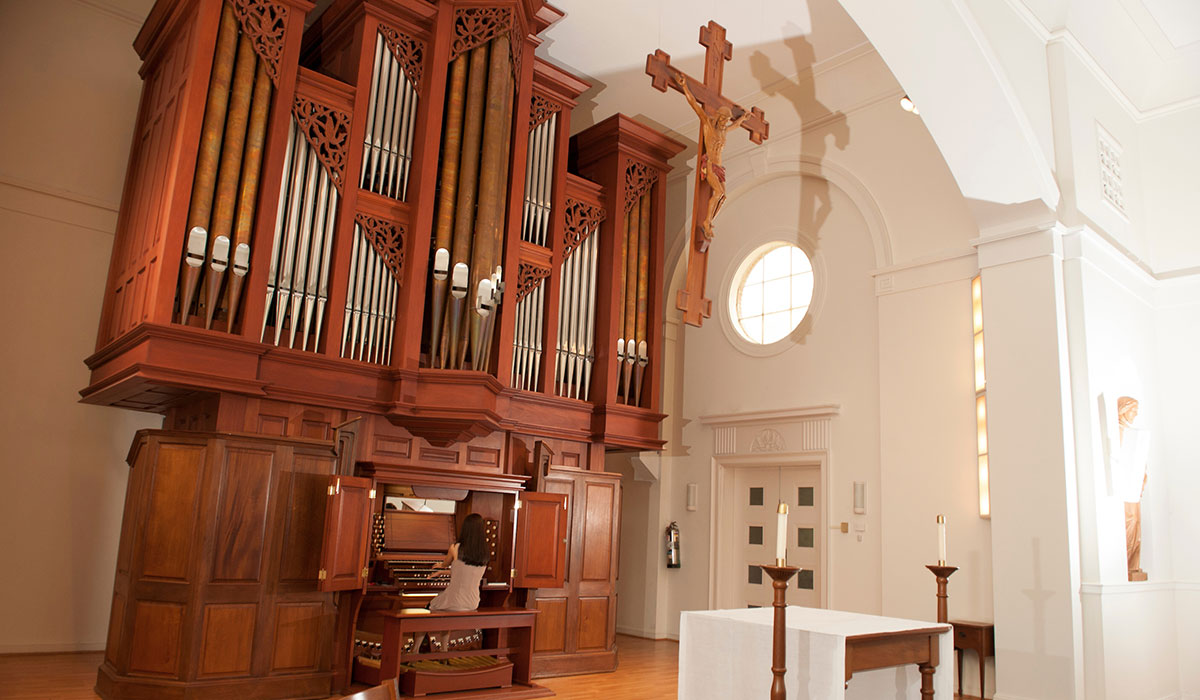 Composition and the Church

Sacred music is an important aspect of musical expression in many cultures and places. Compositional craft- and the values and requirements of composition which we impart to our students - applies equally to sacred or secular music.

We train our student composers primarily to write well - in many styles - but there is a special place for sacred music at Catholic University. As an heir to the rich tradition of centuries of sacred music for the Catholic liturgy (music which is the foundation of almost all later Western classical composition), the music departments hold a special privilege and responsibility in fostering the flame of sacred composition. Many of our students are involved in sacred music on campus - as organists, singers, and music directors - and some pursue careers as church musicians following their graduation (or include work in sacred music as part of a multi-faceted musical career). Our students have held fellowships from Campus Ministry as director of the campus liturgical programs in St. Vincent's Chapel on campus. Other student composers are organists and choral conductors, and combine their creative work with positions on or off campus. Sacred music in all traditions is welcomed and supported, whether Roman Catholic, Orthodox, Protestant, or non-Christian traditions.

Students who choose to write sacred music as part of a larger compositional profile receive support and encouragement through private instruction and readings by instrumental and choral ensembles on campus. The Basilica of the National Shrine of the Immaculate Conception, our neighbor in Brookland, also presents opportunities for students to serve as choristers or organists (by audition), or to participate in the beautiful daily liturgy.

Each fall semester, a graduate composition student is commissioned to create a choral-orchestral piece to be included on the Department of Music's annual Christmas concert, held in the Basilica. This work for major forces, performed on a concert televised by the cable EWTN network, represents an important opportunity for our students to hear their work presented before an international television audience. In some cases, this represents the student's most significant performance to date.

Undergraduate or graduate students who compose sacred music may include sacred music on their degree recitals and Composition Area Recital programs. As performers, they are able to participate in liturgical contexts as pianists, organists, singers, guitarists, or with other instruments.

And, all students have the opportunity to participate in the rich and vibrant liturgical life on our campus.